The news have been spreading fast. For the first time since its initial release in 1999, the Air Max Deluxe has returned to the shelves and put an end to years of waiting for many collectors. And who other than Iceberg – officially crowned Master of Air – is the perfect choice for a chat about one of the lesser known but most daring chapters of Air Max history. So, we met for a deep dive into his massive collection and had an inspiring conversation about a unique silhouette. 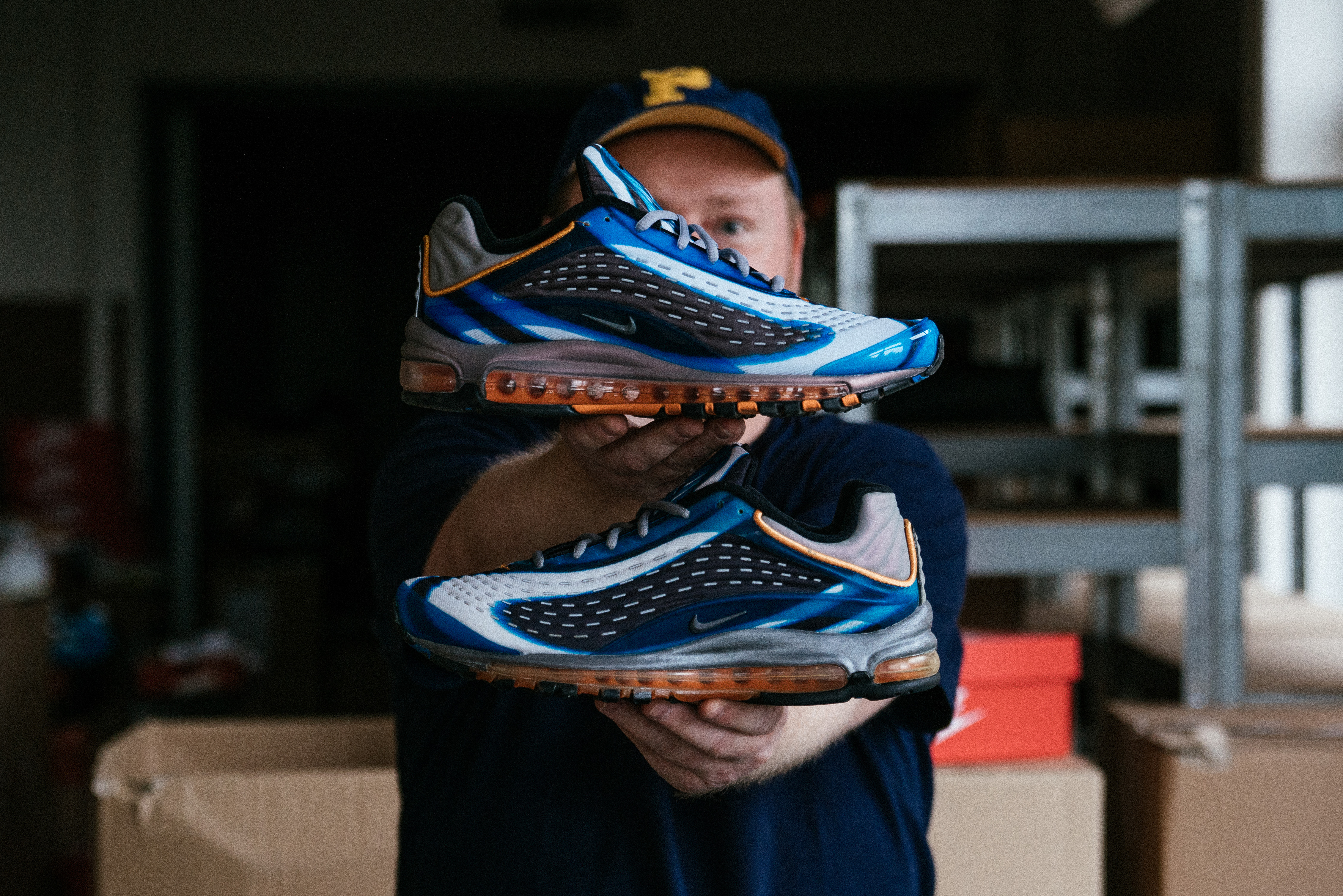 What does the Air Max Deluxe mean to you? What kind of importance does this specific model have in terms of your entire collection and what exactly makes it so special?

Well, back then, the Deluxe was almost impossible to get. It was unattainably expensive priced at 299 Deutsche Marks (150€). You can actually compare it with the 97, just with a way bigger impact. It was just so eye-catching and really something special. In my hometown Leipzig, the only store that had the Deluxe on their shelves was indeed Görtz.

We heard that Nike Portland once asked you for a sample of a Nike Air Max Deluxe model as this style was missing from their archives. Is there any truth to this? We’d love to hear the whole story!

Yes, this is indeed true. I got a request from Nike Portland via my Instagram account about a very special Air Max Deluxe with this particular flame pattern which they just couldn’t procure themselves. So, last winter I met up with two guys in Berlin and gave them a pair of these rare limited editions shoes. Luckily, I had that model twice so it wasn’t too hard to donate one of them for a greater good. 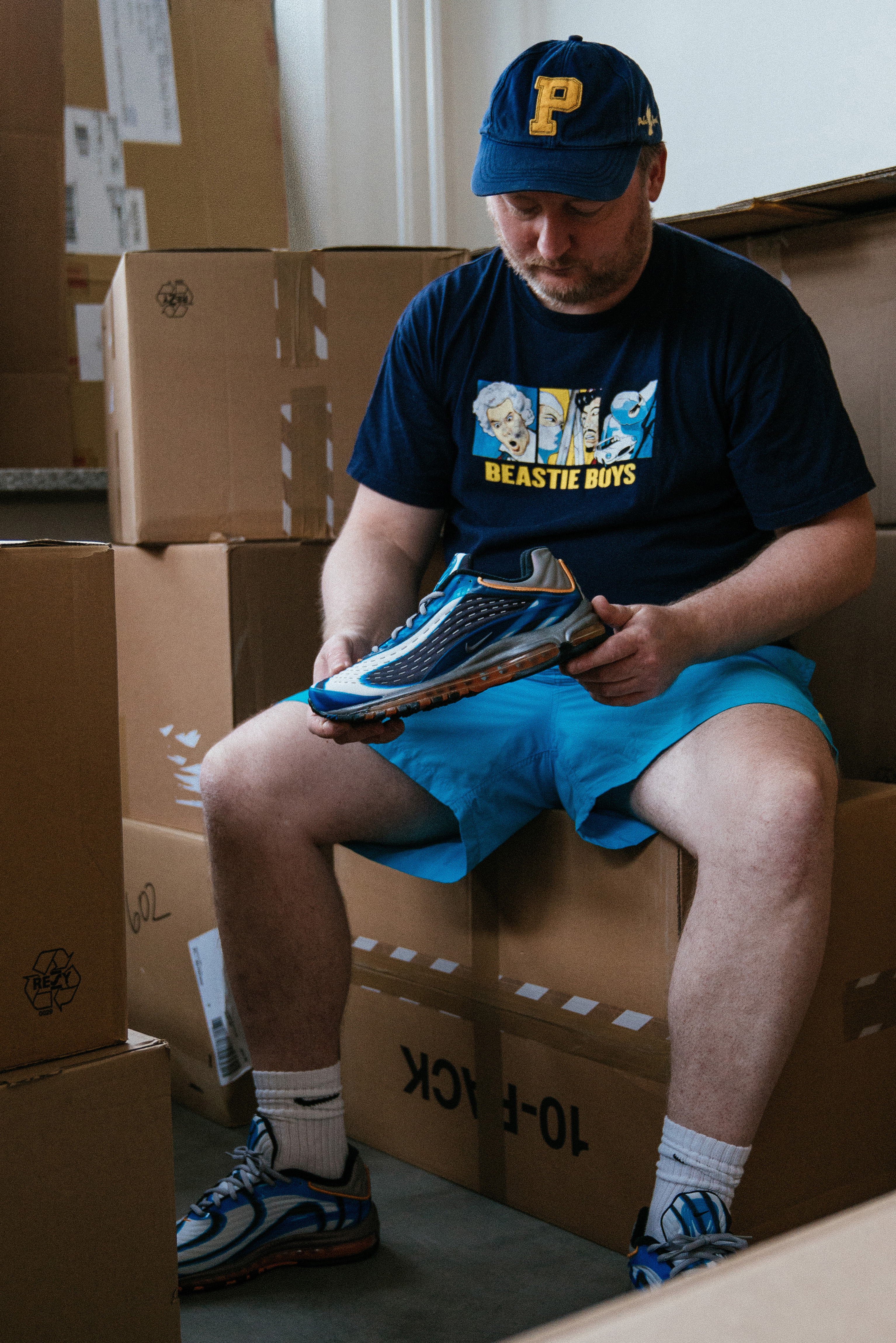 You own around 2000 pairs of Nike Air Max. How many pairs of the Air Max Deluxe does that include? Which particular Deluxe models do you own and what makes them so special to you?

Yes, I think its 4000 Nike models in total which 2000 pairs belonging to the Air Max range. Amongst them, there should be around 20 different Deluxe colorways in my collection. Thinking about my favorite Deluxe I’d clearly say that the OG and the matching women’s model, that comes with neon-green accents instead of the men’s orange, are very daring. I think‚ Grasshopper’ was its exact name.

And all those colorways launched in 1999 and 2000/2001 were pretty dope. One of them was the Deluxe with the ice-blue and red-blue flame patterns, which is one of my favorites by far.

Are there any models you do miss?

For me, owning an entirely complete collection is way more important than owning one special pair of sneakers. As far as the Deluxe range is concerned, no one actually knows the entire range of models which have ever existed – neither me nor the people at Nike.

It’s actually pretty funny as there are always Deluxe models people see in my collection which they haven’t come across before. But honestly I have to admit, that I myself do not know all of them and it really is the case that I still keep on discovering new Deluxe colorways occasionally. 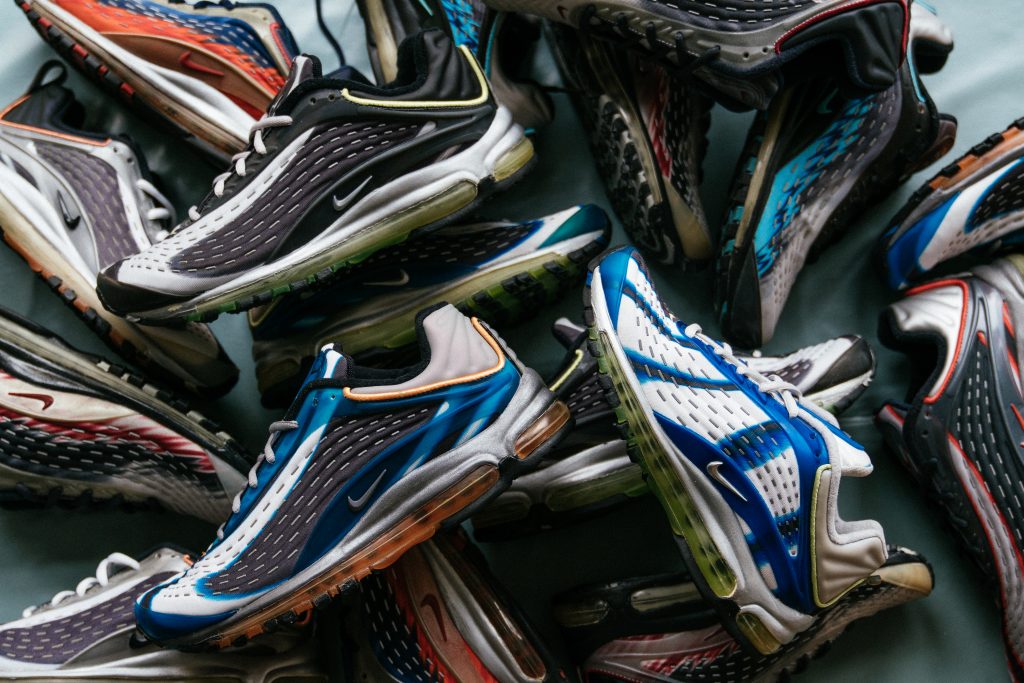 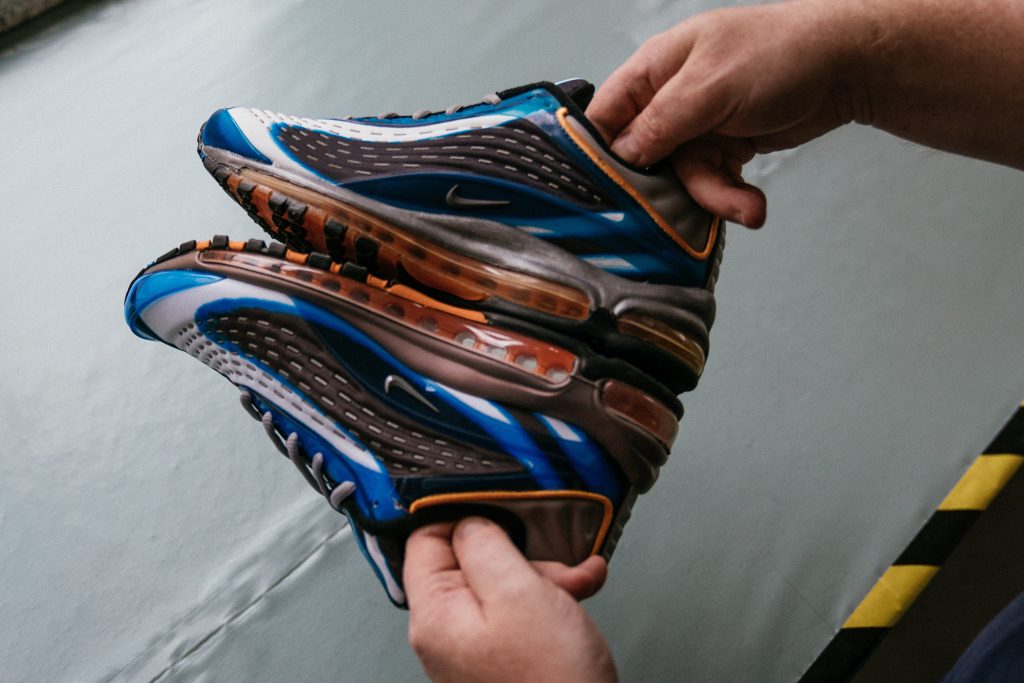 Do you remember where you got all your pairs from? What’s your sickest pick-up story out of all of these models?

I really think I got my first model during Görtz’ end of summer sale for 120 Marks. Nowadays, of course, you could never imagine going to Görtz to hunt for a pair of the Deluxe edition. I actually found all of my other models on eBay.

The Deluxe initially comes from an era connected with 90s rave. Did you play an active part in this era by sharing this connection to and memories of the model? What is the first thing you associate with the AM Deluxe?

Rave-culture definitely played a huge role in my life with its peak from ’94 to ’98. Back then, there actually was no connection between shoes and that sort of thing but I can imagine that the designer chose this as his inspiration in order to make the Deluxe more commercial now. 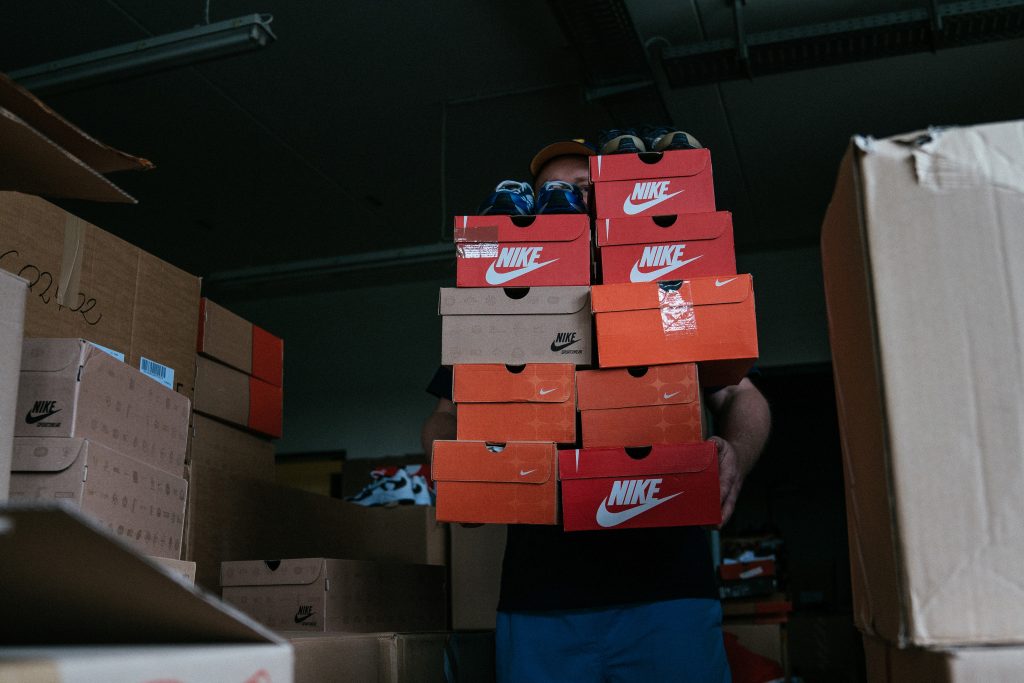 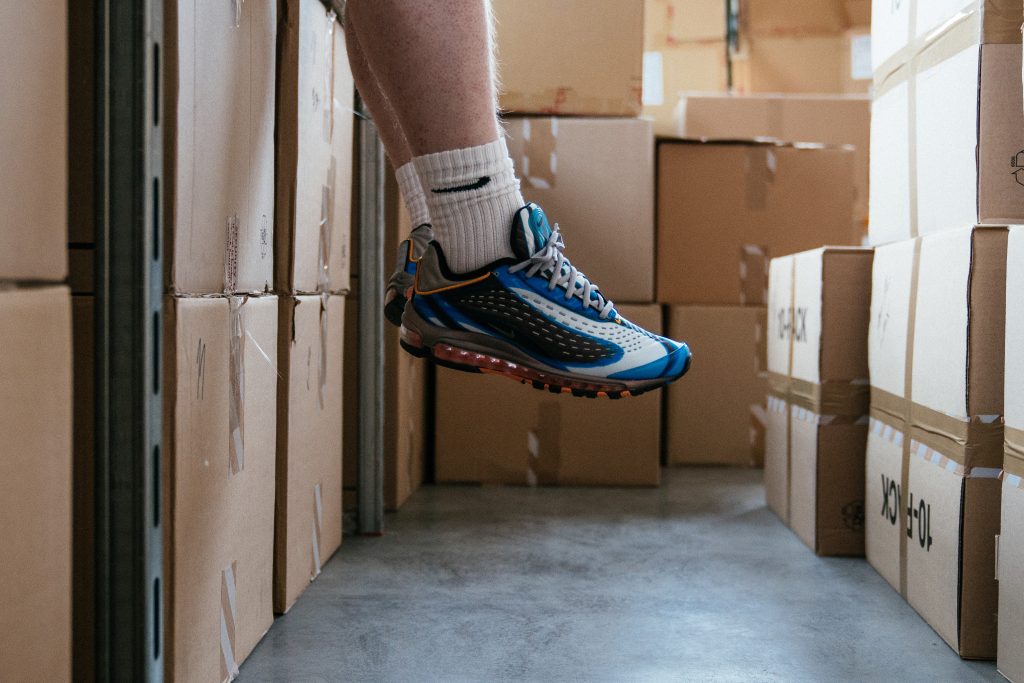 If you had the chance to meet any Nike designer, is there any edition of the AM Deluxe you don’t yet have and would ask him to work on? What would it look like?

I am not the biggest fan of the upcoming monochrome version, to be honest. To me, the Deluxe should definitely be bold, bright and colourful.

Comparing the retro with the OG, what does an expert like you say about the latest edition that were re-released?

The retro is actually pretty close to reality. But no OG can be 100 percent reproduced as a 1:1 version, which is just a result of changes in the production process or the materials used. So there are actually always slight deviations in the retro model when compared with the OG.

Thanks for your time!